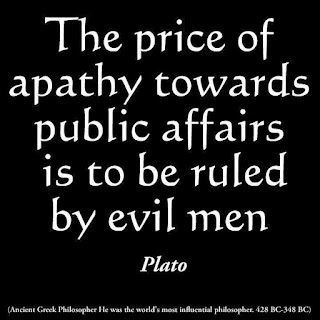 Posted by The East Greenbush Gadfly at 1:15 PM 37 comments:

The latest attempt to get the questions and spotlight off the Town Board on any number of issues is the mantra that “we’ve elected them to make decisions so we should let them do that and quit asking questions.  Questioning is meddling and disrupts the processes of good government.”  The most vulgar expression of this position is the one from Mr. Malone when he said “we’re the majority, and what we pass, passes.”  If nothing else, that’s an invitation for more oversight.

Well, leaving them alone to govern might work if there were a track record which could be pointed to which supported the conclusion that the bunch we’re talking about were all that trustable.  My first case in point that they’re not is the fact that they couldn’t pass an Ethics Code which had financial disclosure and controls on nepotism.

The second cases in point I’d offer is the fact that if some of us hadn’t been asking questions, we’d still have stipends, sick leave incentive and longevity payments going to elected officials, no monitoring of scrap revenue, poop in the Hudson, ……and the list goes on.

If there is any doubt that oversight of our “decision-making body” is profoundly necessary, citizens should read the OSC audits from 2008 and 2012.  They are litanies of what can happen when the appropriate questions are NOT asked of government officials.
Posted by The East Greenbush Gadfly at 11:32 AM 4 comments: