Let your voice be heard!! 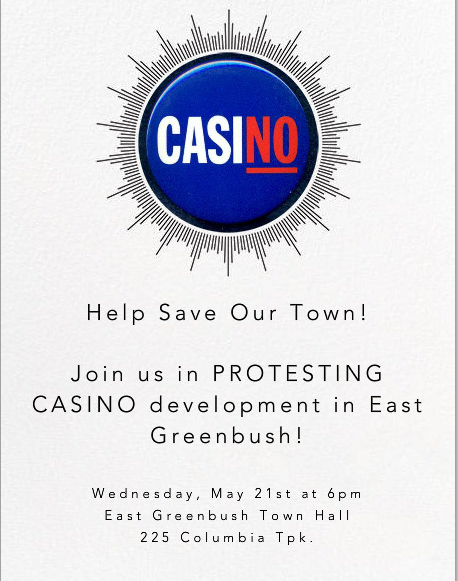 Posted by The East Greenbush Gadfly at 9:04 PM 68 comments:

A Loose Cannon Town Board


After the story appeared in the TU about the EG Town Board approving a resolution favoring the location of a Casino in East Greenbush, I e-mailed the TU reporter (and the Town Board) with a question as to how the numbers from the November referendum could be used to support a declaration of support from the municipality.  No response has been forthcoming.  I followed up with the same question to the reporter’s boss, Rex Smith.  Still no response.

I order to make application for locating a Casino, a developer needs a resolution from the subject municipality.  They got one from East Greenbush based on very dubious support from the community.  The whole deal on Thompson Hill smells, and the whole Board should be held responsible.

I’ve printed below a Comment from Dwight Jenkins submitted for the previous Post.  It appears to me that the whole bunch has their fingerprints on a back-room deal that community stake-holders have every right to have a say in.

“On April 6th (see the Comments on the previous Post) someone named "Larry" asks what I'm going to do when "they" place a casino up on Thompson Hill. Coincidentally a "Larry" owns the property and the project called "Thompson Way" that was illegally approved by the Planning Board on 1/15/14. This is the same project that Supervisor Langley tried to blame on the Planning Board last Wednesday night. Somehow he seems to think that corruption in the Planning Dept. is not his cup of tea and nothing to concern himself with. Of course, no one else on the Board seems to think corruption in the Planning Dept. is anything to worry about either, since none of them batted an eye, but neither did any of them contradict me. So two weeks ago this "Larry" knows about the casino plans but no one else does- it doesn't come at the pre-board meeting, but somehow finds its way onto last Wednesday's agenda, with the misleading statement that not only the State but also the County and the Town voters essentially approved November's gambling referendum. In reality, no one knows how East Greenbush taxpayers feel about a casino in their Town since that's not how the votes were tallied by the Board of Elections. East Greenbush has not yet spoken. Hell, until today most them never even saw it coming to their own town. And another troubling aspect of that resolution: Mr. Langley talks about the financial windfall a casino would bring to our fiscally strapped town. Or would it? Are we really fiscally strapped? See, even though Councilwoman Matters referred to our fiscal "crisis," and Councilwoman Mangold expressed doubt that even a casino would be enough to get us out from under our fiscal woes, we don't really know where we stand since the Supervisor continues to sit on the outside audits we paid more than $30,000 for! Apparently the new comptroller, the one Glenville let go under abnormal circumstances (Google it), is going to do his own audit of sorts. Unfortunately the State Comptroller's office doesn't think much of this idea, telling me that there is no comparison between an in-house audit and an independent outside audit, especially one that we already paid for. The whole place is corrupt. Mr. Langley, what ARE you going to do? It's time to come clean.”


Well the Langley administration (the “Smart Way Forward”) now has its fingerprints on some of the mischief which had its beginning with the previous administration.  When it comes to governmental sleaze, they’re all in bed together.  I’m re-printing below a couple of Posts by Dwight Jenkins which outline the mischief going on on Thompson Hill.  It’s a scandal run by the patrons of both Parties.

It looks like Langley's Planning Board Chairman signed off on a Plat approval for which there is no Planning Board approved Plat Plan.  And he did it after a meeting which never happened pursuant to a resolution which was never passed.  And the PB secretary is saying that Mr. Jenkins has to FOIL for the minutes of the meeting that never happened that are supposed to be a public record.

Seems to me that a false instrument was offered for filing which led to the issuance of governmental permits and approvals.  The Town Board should be acting to correct this perpetual mischief.  But they have their collective heads down the Rabbit Hole.  It’s not like they haven’t been notified.  Time to follow the money.

Here’s the first from Dwight:

“I live next to a planned cluster development that has been stymied for many years now because it never really came close to Town planning and zoning laws. Until now. But not really, it’s just that someone seems to have given the project the go-ahead anyway. Twenty-three units on 19.83 acres situated on the most scenic hilltop in Town, declared under the SEQRA reporting requirements to have no scenic views to be considered, with a lawsuit pending on the sewer system, with a preliminary project plat approval from three years ago that looks significantly different than the current plan, which was never finally approved by Planning Board resolution as required by NYS planning law but instead was just signed into being by the Planning Board chairman back in January, shortly after the Republican purges and in-between the regularly scheduled meetings of 1/8/14 and 1/22/14, which means there are no published minutes and hence no way for the public to know that the project was moving forward. Ya know how we knew? When we saw the heavy equipment you see digging a foundation you don’t see. The whole project has moved forward in a dark, subterranean manner, right down to the re-paving of the pot-holed Kunar Province road that we called home for eighteen years, made possible at a discount price through an interesting and unusual set of circumstances surrounding the State/Federal money pouring in for our latest traffic roundabout. And I’m told by the Town that everything is in order. Yes, I love the roundabout, but I hate going round in circles on a highly dubious subdivision being run by shadowy Town figures and hidden promises. It’s all being FOIL’ed, the dots being slowly connected, and the Town Board has been put on notice, but I thought you should be aware of just how we do business here.”

And the Second from Dwight:

“Now that “Thompson Way” has its first foundation in progress, a few questions for the Town Board:
I have e-mailed each Town Board member, the Supervisor and Deputy Supervisor, the Town Clerk and Planning Clerk, the Building Inspector, and the Planning Attorney about the obvious, arbitrary and capricious nature of the Town’s approach to this project. Twice, in some cases. I referred to State Planning Law, sections 276 and 277, which require public hearings at different points along the road to development as well as a Planning Board resolution and vote on a Final Plat before the Chairman signs off on the Plat and copies go out to the Planning Secretary and to the County. Why did I get only one erroneous response from someone the Supervisor delegated to respond to me? Why did I get a cursory response from Phil Malone and Sue Mangold, but no one else? Why has the Planning department told me I have to FOIL the Town Clerk for the Planning Board minutes that gave final approval to this project on a date when no Planning Board meeting was scheduled or recorded publicly? Why did I never get a response from the Town Clerk’s office when I questioned the legitimacy of this answer? Why can’t the Planning Department tell me it’s okay to come down and review the Final Plat and supporting documents when all of those materials are supposed to be on file within 5 days of approval? What would happen if an outside investigatory agency/agencies started looking into this project, as recently happened in Troy with that interesting abandoned building that was hastily torn down behind the new “Bombers” restaurant? What would they uncover?  What would happen if an injunction was filed to stop the “Thompson Way” project until a court could unravel the Town’s actions in this case? How would the project’s bonding agency react to the potential delay? How would the project’s counsel react to a judge’s order to cease building, when the Town gave it’s “approval” to the project? Would he or she file suit against the Town?
These are all questions that the Town Board should have considered in the past, and certainly should be acting on even now. An edifice is in fact being built. More than one…”

Posted by The East Greenbush Gadfly at 12:06 PM 75 comments: