Unfortunately the things you refer to are just business as usual in East Greenbush politics. They do them when they're scared but they also do them when they're confident which may be even more disturbing. The culture of politics has to change. Local politics here is a blood sport and it's run by people who are better at keeping control of the process than they are at governing. One of the reasons we're looking down the barrel of a casino is because a small group of local 'players' assured Feathers and Company that they controlled this town and could get them any approvals they needed. Both political machines better hope we don't get selected because their only chance of survival next year is for people to forget what they tried to do and how they tried to do it.

The political machines in this town are both working from an obsolete playbook that is unable to solve the problems of local government in the 21st century. They depend on apathy and intimidation to maintain control but the apathy is gone now and the intimidation factor was always overrated. These people aren't anywhere near as tough as they like to believe and they only have power over you if you let them. Next year will be the best chance we have of taking this town away from them and giving it back to the residents and taxpayers. The casino grab was a huge misstep because it proved there's no difference between the two factions. They fight for the right of their friends and families to feed at the public trough, and if we get the casino that trough will only get longer and deeper.

We need not only a new type of candidate but a new kind of politics. It must be civil and it must be substantive. The name calling and character assassination have to stop and the public debate has to be about important things. We now have vast experience of how not to govern a town like this, but we need to develop a common vision of what we want for this community. Our current town board has proven itself unfit to govern and they must be replaced. If we can harness the same spirit and talent that energized the Save East Greenbush movement we can end this lowest common denominator politics and demand great things of ourselves. We may not get this chance again.
Posted by The East Greenbush Gadfly at 3:36 PM 78 comments:

Their Goal: No casino in town 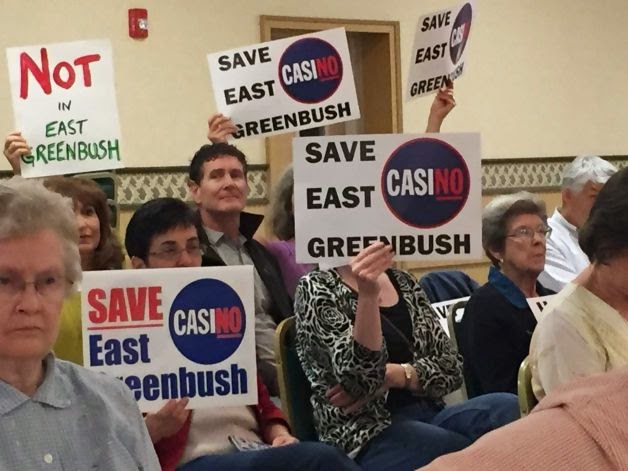 The town's handling of a resolution to back a local casino project brought good-government and anti-casino activists together to form Save East Greenbush.  The result has been a consistent campaign to stop the $300 million Capital View Casino and Resort proposed for Thompson Hill Road.

"The process was really flawed at the beginning. We got taken. It made us very, very angry," said Don Johnson.  The Town Board's vote in April, he said, galvanized him, Dwight Jenkins and Jack Conway, who had worked together on reviewing the town's spending habits, to stand against the casino.

Johnson said his trio linked up with Cara Benson, Elizabeth Wade and Joanne Rector, who were opposed to the casino project.

Benson, a poet who was involved in the Occupy Albany activist movement, said she saw Jenkins' Facebook page opposing the casino and received the mailer at home from the casino developers. She said the Rensselaer County Legislature's May meeting brought East Greenbush casino opponents together for the first time when they spoke against casino development. That's where people like Tina Tierney stood up to speak and became involved.

As Save East Greenbush organized, initially meeting locations were typical for suburban activists — held in a member's living room.  But that soon changed.  "All sorts of new people showed up and organized their own neighborhoods. We had to have meetings at the library," Benson said.

Now supporters of Save East Greenbush turn out regularly for town meetings, including about 80 to 90 at the recent Zoning Board of Appeals meeting.

"It is really the townspeople doing it. People are coming up and asking how they can help," Benson said.
While small anti-casino groups have arisen in Schenectady's Stockade neighborhood and other parts of the state, Save East Greenbush has appeared to be the largest effort to halt local casino development.

Save East Greenbush has hired an attorney, filed one lawsuit and is considering a second lawsuit. It has benefited from Johnson's knowledge of government and the state Freedom of Information Law, enabling it to obtain notes on town meetings regarding the casino project.

Save East Greenbush members' reading of the casino developer's application has led to Councilwoman Sue Mangold recusing herself. And the group has worked with Councilwoman Mary Ann Matters, who now opposes the project.

"We pass the hat," Benson and Johnson each said in separate interviews about how their group pays for its endeavors. Save East Greenbush also advertises for donations and puts out a jug at events to collect money.
When the casino developers presented their proposals to the state Gaming Commission, Save East Greenbush submitted its own binder of information in opposition.

Capital View Casino and Resort has worked to build support. It has opened an office; mailed fliers to residents; worked to obtain local government support; pledged involvement in the community; won support from the business community; and run its own advertising campaign. A spokesman for the casino project did not respond to a request for comment.

Save East Greenbush is waiting for the state to decide which of four applicants in East Greenbush, Rensselaer, Schenectady and Schoharie County will receive a license to open a casino in the Capital Region.
kcrowe@timesunion.com • 518-454-5084 • @KennethCrowe
Posted by The East Greenbush Gadfly at 6:59 AM 131 comments:

We're going to get an idea tomorrow night at the Zoning Board of Appeals meeting just how "politically wired" this whole casino fiasco is.  Capital View has asked the ZBA to "interpret" the zoning code to allow uses which it plainly does not allow in an R-B zone.  Capital View does this by arguing that the Request For Applications from the Gaming Commission included these other uses/amenities as required elements in the projects, therefore getting for the "ameneties" the exemption from local zoning that "gaming" gets by State law.

A real legal "lap-dance" has been coming from the Casino people.  Trying to bend and stretch language so as to get what they need.  It seems clear from the history of the casino initiative in the State that the Legislature intended that potential casino developers would have the sense to look for land for their projects which were properly zoned and not require the cognitive gymnastics we're seeing from Capital View.

Fortunately, the issue before the ZBA was clearly addressed in the Question and Answer sessions with the developers and the Gaming Commission.  The quotation below is from the transcript of those sessions.  It seems clear that if the ZBA members can read English, their votes will be to deny the Capital View request.  The question asked is exactly the one before the ZBA.  And the Gaming Commission's answer is abundantly clear.  Are we going to see some cognitive dissonance (read political wiring) on Tuesday night?  Or will the ZBA follow the law?


"Q.327. Do the preemption provisions of N.Y. Racing Pari-Mutuel Wagering and Breeding Law Article 13 extend beyond the "gaming floor"? Because the statute requires at least one hotel and other facilities, it is not clear why preemption doesn't extend beyond gaming activities.

The preemption of local zoning and land use under N.Y. Racing Pari­ Mutuel Wagering and Breeding Law § 1366 applies only to conduct of gaming as a permitted use or approved activity for the Project Site. N.Y. Racing Pari-Mutuel Wagering and Breeding Law § 1366 does  not preempt local zoning and land use regulation as to non-gaming activities and permitted uses of a proposed Gaming Facility."

Posted by The East Greenbush Gadfly at 8:42 AM 131 comments:

Thanks to Bonnie Kenna.... 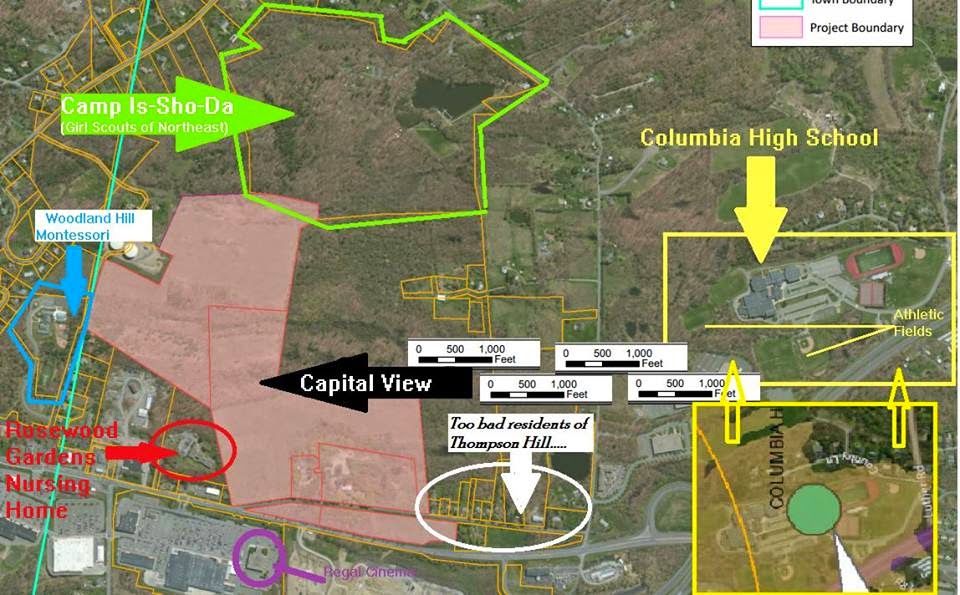 Ladies and Gentlemen.....This is why we have zoning codes to protect communities.  How did Feathers ever think that THIS is an appropriate place for a casino.  How did Langley and DeFruscio and Crist and Gilbert and the rest even think about going along with it?   It's the most inappropriate location in the Capital region.   And the casino attorney wants to argue that the Gaming preemption allows for all the rest of the "amenities."  This idiocy must stop!!


Posted by The East Greenbush Gadfly at 7:01 PM 30 comments:

Planning Board Public Hearing on SEQRA Scoping for Casino


Planning Public Hearing: Wed, Oct 8 at 7pm
YOU are needed!
The casino developers want to fast track the environmental review process. The  time problem is of their own making. They should have started this five months ago. Instead, they were busy mailing out promotional flyers and having back room meetings trying to limit public input.
Please show up Wed, Oct 8 at 7pm at Columbia High School.
The tremendous impact that this project would have on our town is too great to rush the process. Here are just a few concerns:

·        Fiscal. The casino developer’s fiscal impact analysis makes conclusions that are vastly inconsistent with the findings of NY State Comptroller Thomas DiNapoli and several bond rating agencies. We request that the Planning Board as Lead Agency arrange for an independent analysis of the applicant’s study.

·        Social. The developer's applications, both to the Town and to the State, gloss-over the social impacts and costs of problem gambling. The Planning Board must require rigrorous and thorough descriptions of social and related economic impacts, and mitigations.

·        Unavoidable Adverse Impacts. The final scope of review should require full disclosure of unavoidable adverse impacts, as documented by impartial sources NOT connected to the gaming industry. Such impacts should at minimum include, noise, light trespass, effect on businesses and homes on Route 4 due to road widening, compulsive gamblers who cannot be effectively treated, and closure of existing businesses.
Tell a friend. Call a neighbor. Our town needs you to know the facts.
Show up Wed, Oct 8. 7pm. Columbia High School.
www.SaveEastGreenbush.com
Posted by The East Greenbush Gadfly at 2:01 PM 35 comments: