Here's the text of the Times Union Editorial from Friday the 25th.  What apparently has gone on there has unfortunate parallels to the mischief that took place in East Greenbush related to the casino fiasco.  I can't figure out how the planning/approval process avoided SEQRA.  No environmental impact?  Looks like the only way to stop this kind of abuse of the public is to remove the "perps" from office.


"Schodack planning officials may or may not have broken any laws, but they certainly broke the public trust when they withheld details about a new development until the last minute, and then rushed through a vote to approve it the same night.

This exercise in cloak-and-dagger governance came complete with a code name, “Project Red.” It might be humorous, if it were not such a case study in official arrogance.

This mysterious development first came to light in May, when the town divulged this much – that a 175,000-square-foot building was proposed near routes 9 and 20, that it would that it would some kind of warehouse/distribution center, and be a round-the-clock operation.

That’s like saying a food and drink establishment of some kind is locating in your neighborhood, and it’ll have music. What are we talking about? A French bistro with a string quartet, or a dance club with a sound system worthy of a concert hall? A family place or something involving pole dancers?

The full details were kept secret under a “confidentiality clause” that Town Supervisor Dennis Dowds was legally binding. It was not until this past Monday that the company’s identity, McLane Foodservices, was revealed – three months after what passed for a public hearing was held.

Clearly, a public hearing on a project that citizens don’t have the full details about is a mockery of open government. The best residents could do was ask generic questions about a generic proposal. Perhaps that’s what the town preferred for a site where previous proposals have failed amid public objections.

More details would have allowed them to ask more specific questions and raise specific issues. The full disclosure that the town refused to provide might have revealed some problems with the town’s review and raised the need for noise, traffic, and environmental studies. Maeve Tooher, attorney for the Birchwood Neighborhood Association, notes that the project is on an aquifer, and that documents show widely different estimates of how many trucks would come and go – ranging from 17 to 75.

But there will be no studies. The firm’s identity and other relevant details only came the same day that the Planning Board cast its vote.

Such shabby treatment of citizens is reminiscent of how things were done in the waning days of the cronyism that was once standard operating procedure in places like Albany, where public boards met at inconvenient times while people were tied up at work and unable to make their voices heard. Where development in the environmentally sensitive Pine Bush was rammed through. Such shenanigans were finally reined in by courts that set the city straight on good government, and by voters who booted politicians who were happy to serve as rubber stamps for well-connected business interests.

Schodack officials would be wise to heed the lessons of that history, or risk a fittingly public embarrassment, in the courtroom or at the polls."
Posted by The East Greenbush Gadfly at 10:28 AM 27 comments:

Posted by The East Greenbush Gadfly at 9:44 AM 20 comments: 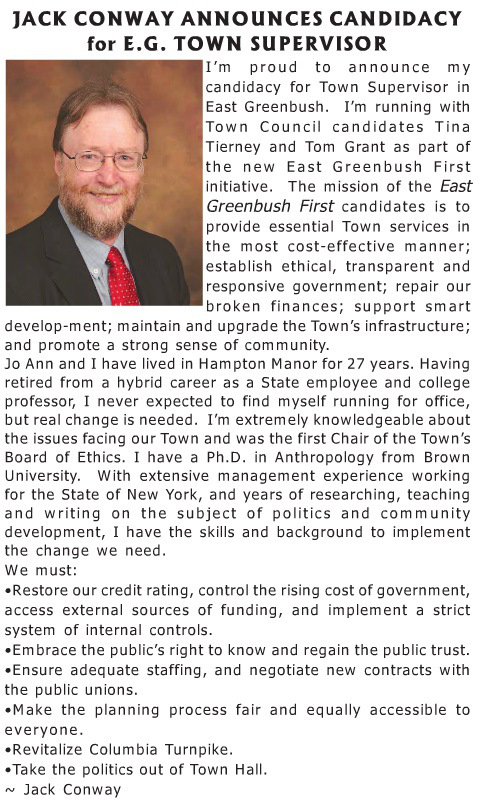 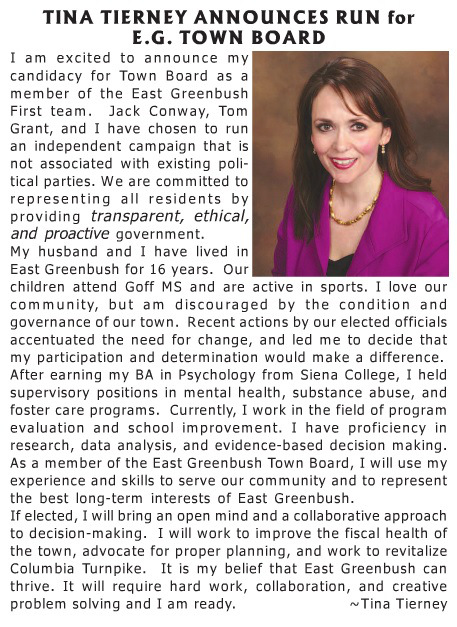 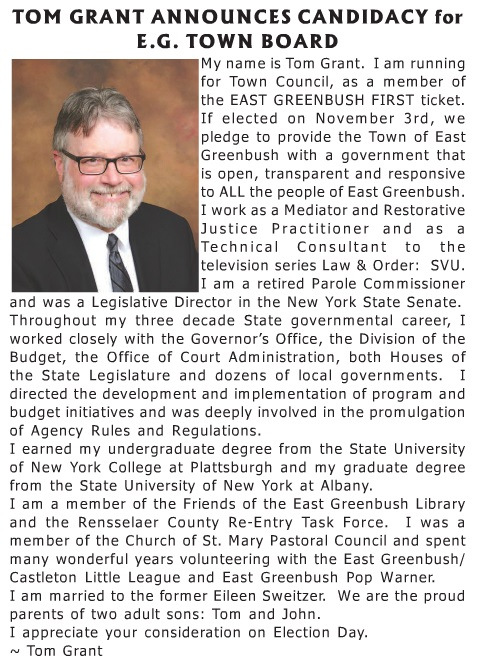 Posted by The East Greenbush Gadfly at 7:30 PM 24 comments: 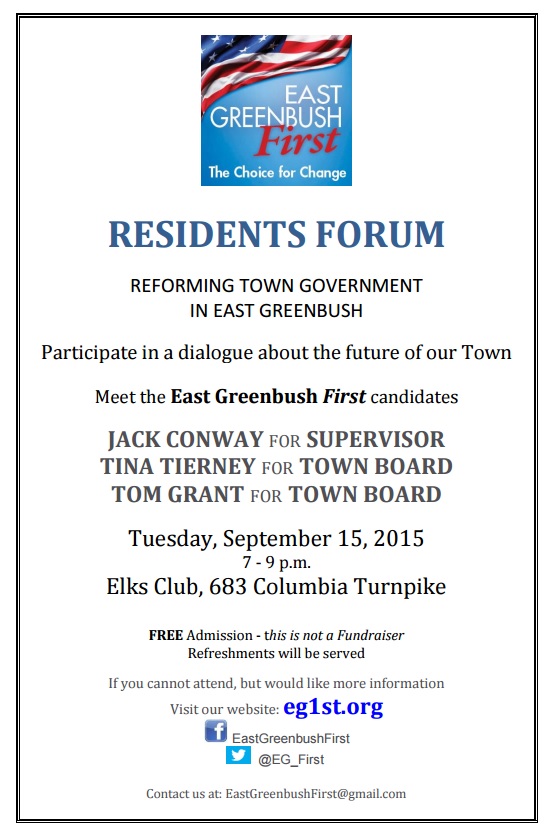 The East Greenbush First team has published its Platform and Plan for governing on their website and it is available at this link:  http://www.eg1st.org/platform

What a refreshing and encouraging approach to candidacy and governing!!  This slate has done their homework and has produced a plan to which they can be held accountable by the people.

Posted by The East Greenbush Gadfly at 1:43 PM 49 comments: