We Need A CLEAN Break!

Some interesting letters in today's Advertiser.  There are three which I want to give wider readership, those by Eileen Grant, Jonathan Shapiro and Tina Tierney.  I'll cut to the chase.  Both of the major parties have had their chance at governing in recent years.  And both have screwed it up - royally.  They've spent most of their time taking care of the common insider population, notwithstanding solid advice from the State Comptroller as to how to begin to fix the disasters which they created.  Not one move in a positive direction.  Now Moody's has dropped the ultimate bomb.  What do you think that might do to debt service on the WWTP?  They've both had their chance, with all kinds of good advice.  What do you think the chances are for improvement if either machine gets a majority again?  Remember, "the past is prologue."  There's just not the will or the "know-how." 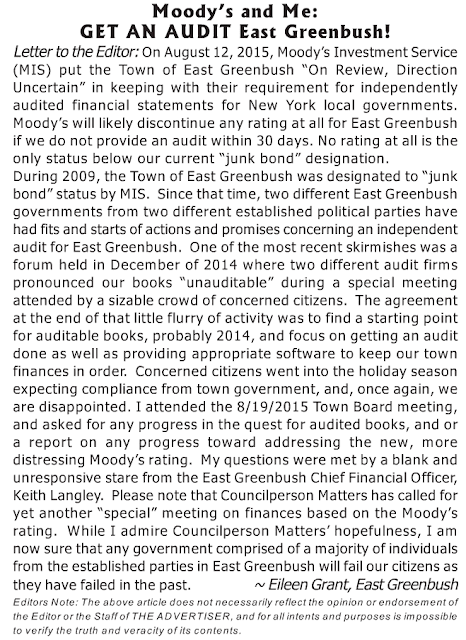 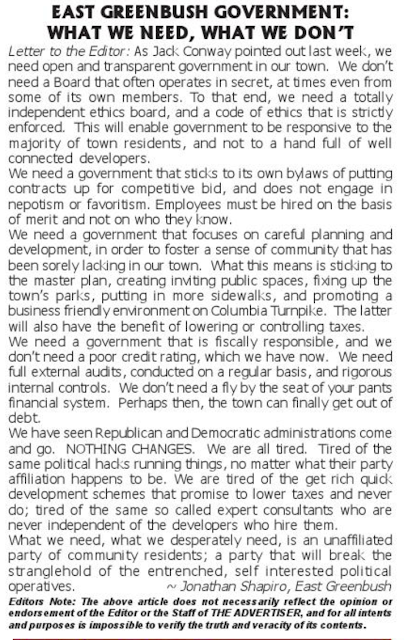 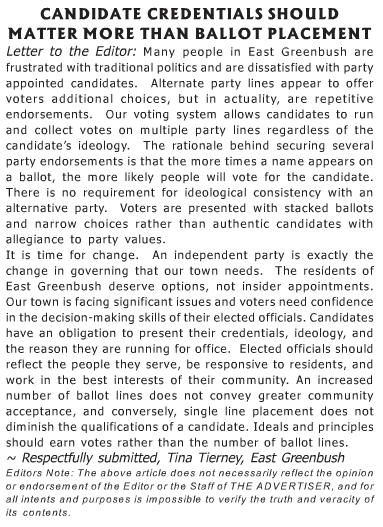 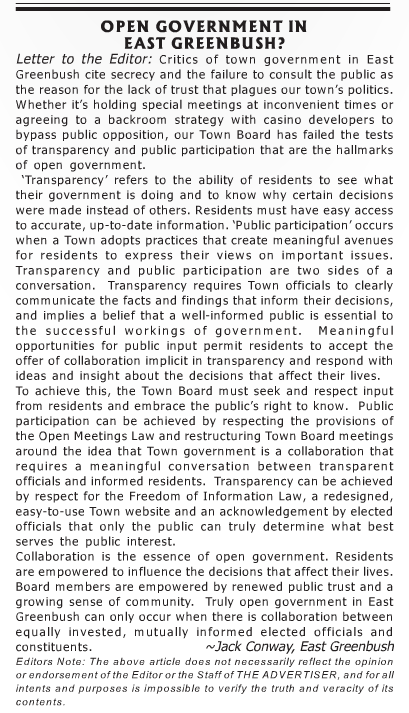 The appearance of Jack Conway's letter in the Advertiser this morning was fortuitous in the context of last night's Town Board meeting.  I think one of the things Jack is getting at is that East Greenbush has no healthy government traditions, rules and mores to which it can turn in crisis or need.  "Institutions" are supposed to help sustain a community.  Our governmental culture has been about tearing up and exploiting "community" for a very long time.  Looks to me like we need to learn some things which have not been a part of the governmental culture for a very long time.
Posted by The East Greenbush Gadfly at 12:54 PM 60 comments:

Here's Jonathan Shapiro's letter in today's Advertiser.  It's great!!  It raises again some questions which have been repeatedly asked, but not answered by Town officials.  Below the letter, I've included a link to an excellent commentary on the matter from East Greenbush Truth, and a link to the minutes of the Special Meeting of the Town Board which re-directed the funds to pave Thompson Hill Road.


Although East Greenbush has a Master Plan, it is routinely over ridden for the benefit of a select few developers.  A perfect example of this is the Thompson Way Subdivision (PDD), where Hart and Maney are building the first duplex.  There is a great deal of dispute over whether or not the final development plan even received Planning Board approval.  What there can be no dispute about is the 1/4/13 Memo in which the developer agreed to be responsible for repaving Thompson’s Hill Road for $93,000.

However, on 9/3/13 the town approved a plan to spend over $145,000 to pave it.  No bids were ever solicited and Rifenberg Construction, our Supervisors former employer, was given the contract.  The money used for this, GEIS funds given by FEDEX, was supposed to go for sidewalks and other amenities on Route 4 and Couse Corners.  The stated reason was that the town needed a two day detour for the building of the Mannix Road round about on Route 4, despite the fact that Route 4 is state owned and the town is not responsible.

—WHY DID THE TOWN BOARD SPEND MONEY TO DO SOMETHING THAT THE DEVELOPER ALREADY AGREED TO?

—WHY DID THE BOARD SPEND AN EXTRA $53,000 BEYOND WHAT THE DEVELOPER SAID IT WOULD COST?

—WHY DID THE BOARD  MAKE EXCUSES ABOUT THE REASON  TO PAVE THE ROAD, WHEN THE TOWN HAD NO RESPONSIBILITY FOR A DETOUR?

—WHY DIDN’T THE BOARD PUT THE PAVING CONTRACT UP FOR BID?

—WHY DID THE TOWN BOARD SPEND MONEY ALREADY EARMARKED FOR OTHER AMENITIES, SIDEWALKS ETC, THAT HAVE YET TO BE BUILT?

We need a NEW political party in this town


http://www.eastgreenbush.org/government/town-board/agendas/doc_download/1066-932013-special-meeting-minutes
Posted by The East Greenbush Gadfly at 1:42 PM 57 comments:

East Greenbush First Petitions Are In

East Greenbush First, the independent option for November's Town election submitted their nominating petitions this afternoon.  They collected 1596 signatures.  The number necessary to nominate was 294 signatures, 5% of the people who voted in East Greenbush in the last gubernatorial election.  EG1st submitted 27% of that number.

Thirty two citizens carried petitions for the East Greenbush First slate, almost as many as the 39 Democratic Party Caucus electors who nominated the Dem slate.  It's not an official count yet, but the Gadfly did hear that in the neighborhood of 450 registered Dems signed the EG1st petitions.

Congratulations to Jack Conway, Tina Tierney and Tom Grant and their ever-growing coalition on a fantastic job.  Now let's get busy on getting out the vote.

Here's a pic of some of the 32 petition carriers: 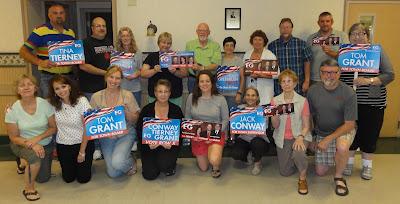 Posted by The East Greenbush Gadfly at 2:56 PM 66 comments: