This is an atypical year politically and the EG 1st candidates have highlighted the absolute NEED for sincere leadership. The Langley camp has sent out a cartoon card bashing Dave Van Wormer for conduct that, from any other source, would likely disqualify him for the job. The problem is that it came from Langley, leaving the average voter disgusted with BOTH major parties.

If you are a thinking individual, it's hard to look at Van Wormer's qualifications, or lack thereof, and still consider voting for him. Even if you dislike the negative ad Langley issued, it's hard to willingly revolt by voting for the guy he attacked, because to a certain degree, Langley is right, Van Wormer is unqualified... but that does not inspire a vote for Langley.

In a normal year, we would have to suffer the indignity of having to vote for one of these two... candidates for lack of a better word, and feel bad about ourselves for doing so, knowing full well neither one of them bring dignity to the office nor do they have the best interests of the residents at heart.

The EG 1st candidates have held themselves to a higher standard and promoted the needs of the community over their own personal ambitions. They are also, each in their own right, supremely qualified to serve.

In any other election year, one would look a the two major party candidates and vote for one or against one. However, this year, as the two major parties parade their selected nominee around like Mrs. Astor's horse, people should be continually reminded that there is in fact an alternative. Candidates who are prepared to do exactly what this town needs.

Meanwhile the two major parties, who are forever stuck in the their ways find themselves with democrats NOT supporting the democratic candidate and instead pushing their people to vote for the republican, a guy who has demonstrated the past that they can't trust him. And democrats are holding their nose to support a guy that was encouraged to NOT run at all. Republicans are hard pressed to support their guy because he not only insulted them but assaulted them with his hard line support of the casino initiative without giving residents the courtesy of weighing in on the decision. A decision which fell very predictably flat.

All the while, there is an alternative that makes sense for voters. Jack Conway, Tina Tierney and Tom Grant have stayed above the fray and focused on solutions for this town. If voters do not recognize this as the true opportunity this is to rebuild this town... this town is destined to violated by corrupt political hacks who will never put the needs of the town ahead of their own. That said... no one, including this piece and it's author, should ever tell anyone how to vote, for whom to vote and insist on it. Your vote is your own. This article was simply to point out an opportunity and an option to deviate from the past. One would be remiss to not point it out.
Posted by The East Greenbush Gadfly at 8:44 PM 39 comments:

Let's Put an End to the Irresponsible Fiscal Oversight

The Post below is from East Greenbush Truth.  It's too good not to be a "guest editorial" on the Gadfly.  Read Away!!


We are 11 days away from one of the most contentious elections in East Greenbush and our East Greenbush Republican Committee has failed to file 5 of the last required financial disclosure reports to the Board of Elections.  This is the same committee that has helped run our town further into the ground over the last 4 years.  This is the same committee who is supporting a CFO who has also played a hand the deteriorating condition of our town’s financial records. Our town’s credit ratings have fallen below junk bond status, with 3 of our general obligation ratings now completely withdrawn because our CFO, under the leadership of our EG Republican party, has failed to provide an audit of our town much like the committee backing him has failed to file their required financial reports.  Our Supervisor has failed to provide a verified audit in his tenure as our town’s CFO.  We not only became the laughing stock of the Capital District when our town was put under a microscope during the casino fiasco, but we were embarrassed to find out that we paid two respectable accounting firms nearly $70,000 to attempt to complete an audit but were unsuccessfull because our financial records are too much in disarray.
The committee is requred to file a 32 Pre Primary Report, an 11 Day Pre Primary Report, a 10 Day Post Primary Report, a 32 Day Pre General Report, and an 11 Day Pre General Report – none of which has been filed.  New York Election Law requires that any candidate or committee raising or spending, or expecting to raise more that $1,000 must file.  Candidates and committees must disclose all financial activity made in connection to their own campaign or in support of a candidate.  Candidates who do not exceed the $1,000 threshold may file an “In-Lieu-Of-Statement,” however NY Election Law prohibits constituted and party committees from filing such statement.  NY Election Law 14-124(4) states:  “The only committee that can file In-Lieu-Of-Statements are authorized committees supporting one candidate or a committee solely supporting or opposing a ballot proposal/proposition.”
If there is no financial activity, then such candidate or committee must file a “No Financial Activity” report.  It is factual that the East Greenbush Republican Committee has incurred financial activity.  In the July 30th Advertiser, Ed Gilbert wrote an ad supporting Keith Langley that was explicitly paid by the East Greenbush Republican Committee.  Ironically, this piece was to call out former candidate Michael Poorman for failing to file his required financial disclosures.  (https://eastgreenbushtruth.files.wordpress.com/2015/03/ed-gilbert.png)  On September 3rd The East Greenbush Republican Committee paid for two ads in The Advertiser, “A Message from East Greenbush Republican Town Chairman Dan Fiacco ‘Supervisor Keith Langley Deserves Re-Election'” (https://eastgreenbushtruth.files.wordpress.com/2015/03/republican-committee.png) and the infamous “Turnaround” ad (https://eastgreenbushtruth.files.wordpress.com/2015/03/langley1.png).
The East Greenbush Republican Committee has hosted at least two fundraisers since the July Financial Disclosure Report, one on August 11th when they hosted the “Fundraising Reception in Support of Larry Lenartz and Trent Tibbitts” and the other on October 13th for their “Celebration Event.”  Both events requested that checks be made payable to the East Greenbush Republican Committee.
In 2011, before our Supervisor took office Moody’s had actually upgraded our credit rating from “negative” to “stable.”  Two years later when our Supervisor was in office for a year and a half we were put on a list of cities/towns facing bankruptcy.  Almost 4 years into our Supervisors role as CFO Moody’s downgraded us and withdrew our credit ratings.  Is this the person or committee you trust?  The pattern of our CFO and his respective Republican Committee failing to provide the necessary financial disclosures (for our town, a verifiable audit) needs to end.  We the residents can make that happen on November 3rd, 2015, our town has suffered enough!
Posted by The East Greenbush Gadfly at 4:04 PM 62 comments:

Supervisor Langley is making the claim that he has reduced the millions of dollars interfund debt in East Greenbush to $300,000.  He is supposedly doing this with the “support” of the Annual Update Documents (AUDs) submitted to the Office of the State Comptroller.  A couple of weeks ago, Moodys Investor Service moved East Greenbush from “Junk Bond” status to its watch list and then to no rating at all based on the fact that East Greenbush has failed to produce certified audits of its submitted AUDs.  There is a simple solution.  As the Chief Financial Officer of East Greenbush, Mr. Langley could certify his submitted AUDs upon which he is basing his campaign claims and submit them for audit by a competent CPA firm.

I believe that the reason East Greenbush doesn’t have certified audits for the recent years is that the administration doesn’t want to get a “qualified” opinion from the CPA on the financial statements.  The Independent Auditors Report, Management Letter and the Notes to the Financials would be a real help in getting financial matters in order, but these elements of the audit report would also list the failures of management.  That’s why we don’t have the audits.  The probable “qualified” opinions from the CPA firm would also expose the claim of the Supervisor that he has reduced the inter fund debt.  Moodys called his hand, and he has no cards to play.

By refusing to aggressively resolve the Town’s financial condition issues, Mr. Langley is also preventing the other Board members from having the information necessary to exercise their fiduciary responsibilities in the management of the Town.  Ms. Matters and Ms. DiMartino should be pointing that out to the Attorney General and the State Comptroller.  If they are being prevented from performing the oversight provided for by law, the Attorney General and State Comptroller should be intervening.  Mr. Langley could be getting dangerously close to a Financial Control Board.

Posted by The East Greenbush Gadfly at 9:26 AM 10 comments: 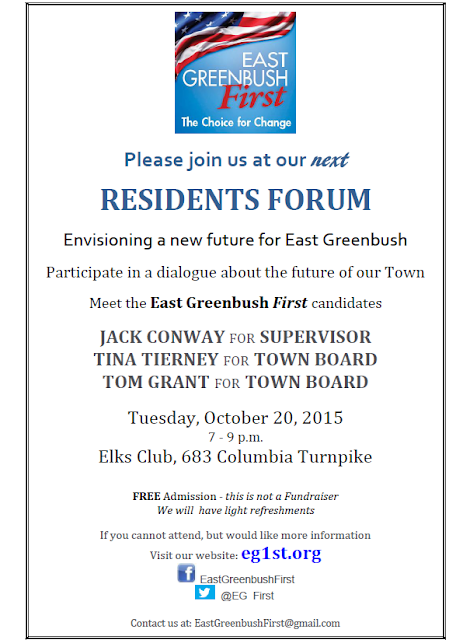 Posted by The East Greenbush Gadfly at 9:16 AM 24 comments:

Free and open to the public.
All candidates for Supervisor and Town Board have been invited.
The public will be able to submit questions at the event.

Here's the sample ballot for November 3rd.  EG1st is on Row I at the bottom.  There are literally "millions" of reasons not to return either major party "machine" to power in East Greenbush.  Those millions are out of our pockets and into theirs.  Time to put a stop to the sleaze and the inside deals and the nepotism and the patronage and the favoritism.  Time for some honest and transparent government.  Take a look at the ballot and remember it.  Some of the reasons for voting EG1st are in the following link and in the letters from yesterday's Advertiser. 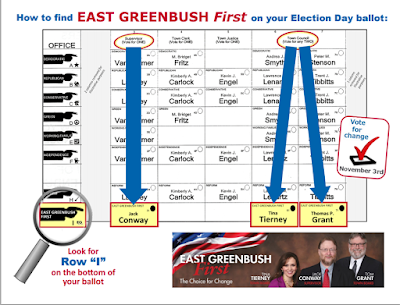 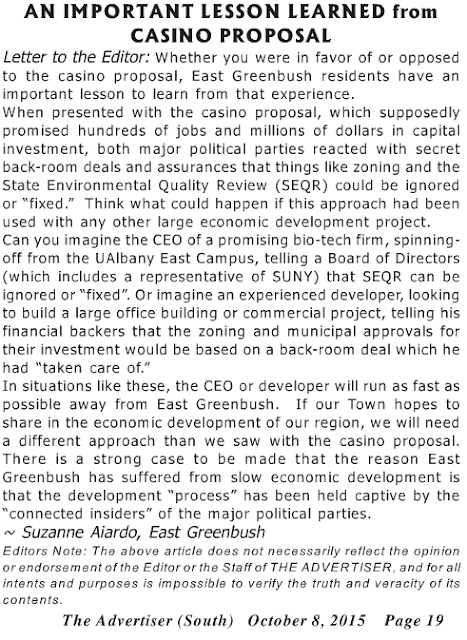 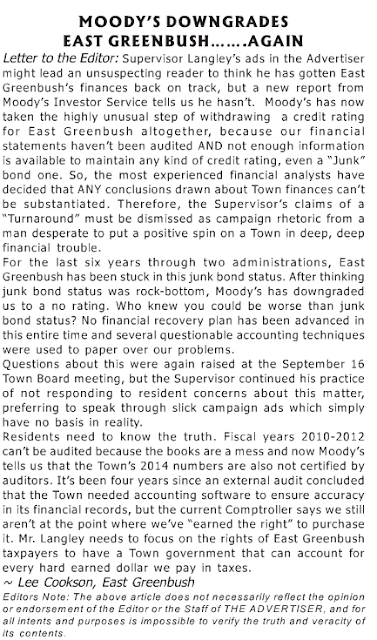 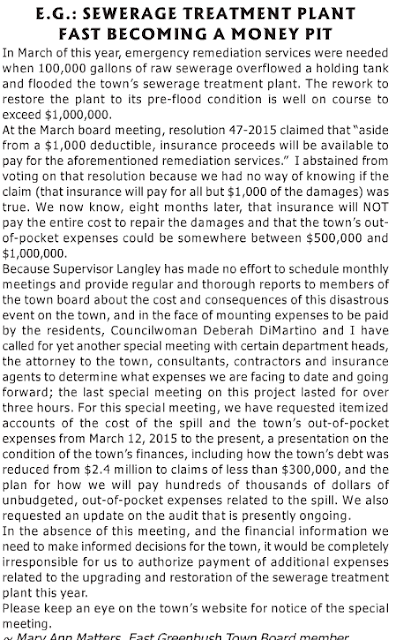 Posted by The East Greenbush Gadfly at 4:51 PM 68 comments:

With the Supervisor and Town Board candidate's Debate and the Resident's Forum sponsored by East Greenbush First, October will be a decisive month for our Town.  Please mark these dates and plan to attend. 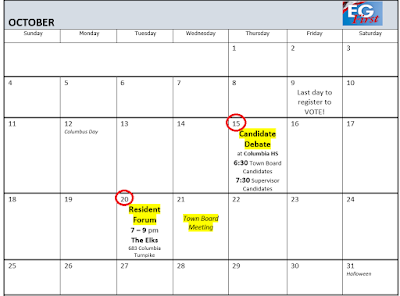 Posted by The East Greenbush Gadfly at 1:57 PM 30 comments:

This letter was in last week's Advertiser.  It's an important statement which needs to be read and understood by residents and voters.  If a decent code of ethics had been in place, followed and enforced in the past, we'd be in less trouble as a municipality. 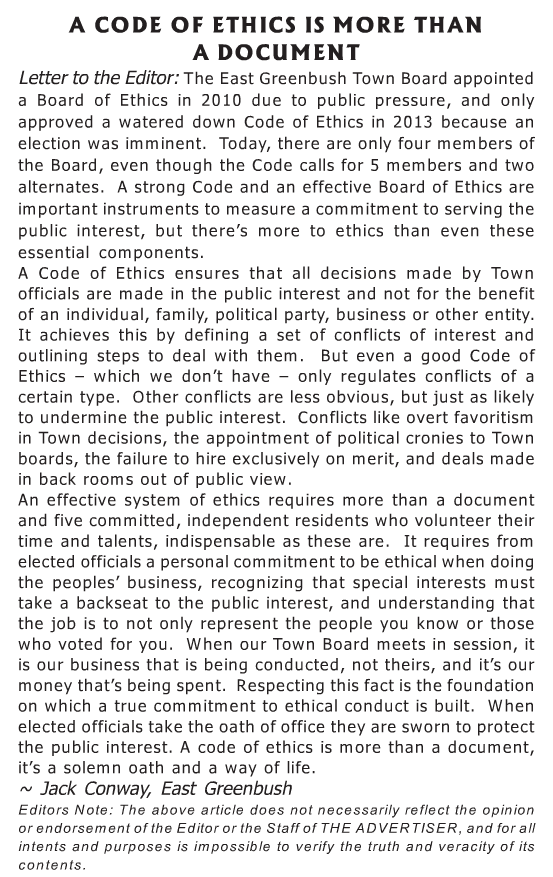 Posted by The East Greenbush Gadfly at 9:58 AM 39 comments: