The Right Side of History

This last few years with reform efforts, Save East Greenbush and the victory of East Greenbush First has brought back some great feelings and memories from a long time ago. In 1958 I was a High School Junior in Patterson, California. I attended a leadership conference with students from all over the State at Asilomar Conference Center on the Coast. Speakers were Andrew Cordier from the United Nation who addressed the issues of the French Algerian conflict.  (Some of that fallout might have been in Paris last week.)  Martin Luther King, Jr. was there to talk about his experience in the Montgomery Bus boycott. I ran into King in the Recreation Hall and he asked me to shoot a game of pool. He cleaned my clock. In five years he'd be delivering the “I have a dream” speech, and in ten years he'd be killed by an assassin. That brief conversation with MLK was my first real encounter with a “mover of events.” He struck me as an ordinary guy with a vision and a commitment to it.

Six years later, the US Senate was debating the Civil Rights Bill which was introduced when JFK was still alive and in a major conflict with George Wallace. In the Spring of 1964 the debate in the Senate was long. The religious communities in the United States joined to support the passage of the Bill. Protestant, Catholic and Jewish theological students from all over the United States organized an around the clock 27/7 vigil at the Lincoln Memorial in Washington in support of the passage of the Civil Rights Bill. I was there with 5 of my Seminary classmates from Chicago for our “shift” from May 7 to May 9, 1964. 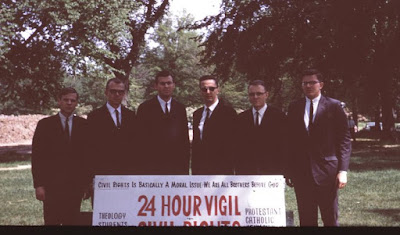 We were also “monitored” by this member of the American Nazi Party. George Lincoln Rockwell also paid an uncomfortable visit during our time on duty. 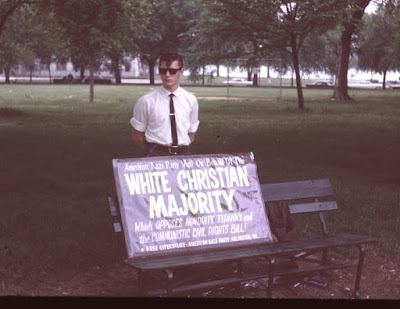 The New York times on its front page on April 29, 1964 credited the efforts of the churches and synagogues and the united theological students as influential in the passage of the Bill. When Lyndon Johnson signed it, it was a time of great joy and satisfaction.

The victory of EG 1st and the efforts of all of those who made that possible brought back some of the joyful feelings that I felt over 50 years ago. I'm proud to have been a part of it.  Ordinary people can do the right thing and be on the right side of history.
Posted by The East Greenbush Gadfly at 8:54 PM 58 comments:

Yes Ed, We're not in Kansas

Went to a party tonight - a thank you party for East Greenbush First volunteers.  Met some folks I've never met before.  A house full in a very big house.  What an experience!!  We made some history in this Town.  What was it......49% in a three-way Supe race?  The Reps said that EG1st was "not a factor."  The Dems cannot be quoted.  The machines never saw the people coming.  They believed their own press releases.
Posted by The East Greenbush Gadfly at 8:30 PM 25 comments:

From A Good Friend of the "Fly"

Someone once noted that there are few things in history that had a more improbable outcome than the birth of this nation.  Against insurmountable odds, a small band of revolutionaries gave birth to a new form of government, of, by and for the people… and we have never looked back.
Last night, while on a much smaller scale, the residents of the Town of East Greenbush experienced a similar fate with the victory of the EG 1st team and Jack Conway, Tom Grant and Tina Tierney deserve congratulations.  Not just for winning, but doing so in a fashion that was respectful of the voters intelligence and for valuing the rights and needs of this community.
Leadership does not begin after the election or even after the swearing in ceremony.  It begins the day a team of people decides to pursue a course of action that would grant them the opportunity to make a substantive contribution to their community.  On that day, that team begins to surround themselves with like-minded people who help craft a message, formulate a plan and follow that plan.  The EG 1st team built just such a team and should be commended for it.
That said, the work that began months ago, goes into overdrive now and there is too much work to be done to take extended bows or victory laps.  Gloating is for suckers.  True leaders identify the work ahead and get right to it.  That’s what the EG 1st team promised and it is a reasonable expectation since, to their credit, they won an election free of the stigma of a major party.  They do not own any of the failed policies of the past decades, nor the contracts nor the budgets or a myriad of other facets of government that need to be corrected here.  Perhaps in this new, somewhat unexpected government, the real winners are disenfranchised residents in this town, who have something meaningful to contribute, but have been shut out because they had the wrong last name, belonged to the wrong party or just didn’t know the right guy.
There really isn’t a right guy anymore.  If you have a way to contribute that can help rebuild this town, this is a team that is as welcoming as lady liberty herself.  Your credentials matter more than your Facebook friends page, because here’s the thing… the EG 1st team isn’t Jack, Tom and Tina… it’s all of us and they didn’t get here on their own and they are very gracious to note that.  Residents gave them this opportunity and it is reasonable to assume that residents want to see them succeed.
So folks, be prepared to participate.  Introduce yourselves to your new government and get ready to get your hands dirty.  Attend a board meeting and show up with your input for improvements and your resume.  We now have the government that everyone always wanted, but no one thought we would ever get.
The work doesn’t start January 1st, it starts now.  We have an opportunity to be a part of building a new East Greenbush.  One where the successes are shared by many, not the few and to be part of that is something that will be rewarding and special.  So take a bow EG 1st… and get to work.  Like someone once noted… to whom much is granted, much is expected, but don’t worry, we don’t expect you to do it alone.
Posted by The East Greenbush Gadfly at 1:19 AM 129 comments:

We Need A Clean Break -- Two

"Insanity is doing the same thing over and over again and expecting a different result."

“Those who cannot remember the past are condemned to repeat it.”


If you’ve been watching East Greenbush Town government for any length of time, it should be clear to you that the two major political “machines” are pretty much interchangeable.  One got us in a financial mess, and the other one didn’t do anything about it.  The main reason for that is that what passes for “policy” is primarily driven by the politics involved – taking care of the insiders who call the shots from behind the curtain.  That’s how all the mischief took place on Thompson Hill -  the illegal Plat approval, the “duplex” with 4 front doors, the road paved with transferred amenities money by the Supervisors former employer without a bid, and finally the casino stuff complete with zoning manipulations.

Before that series of episodes, the interfund debt was created by non-management and internal controls that permitted illegal stipends, unlawful longevity and incentive payments and even ineligible persons being put on the Town’s medical benefit plan.

The last three reports by the Office of State Comptroller are repleat with long lists of findings and recommendations addressing the problems facing the Town.  There’s another report in preparation which I’m sure will have the same messages.  Neither administration backed by its respective machine has made any effort to address and implement these recommendations.  It’s just not in their “interest.”

So to expect any different outcome from either Republicans or Democrats by electing either on November 3rd is simply – Insanity.

We need a clean break from the past, and a future delivered by a Supervisor and Board who chose to be free of the “strings”  held by the old insiders.  Vote East Greenbush First!!!  Jack Conway, Tina Tierney and Tom Grant.


Posted by The East Greenbush Gadfly at 2:09 PM 28 comments: