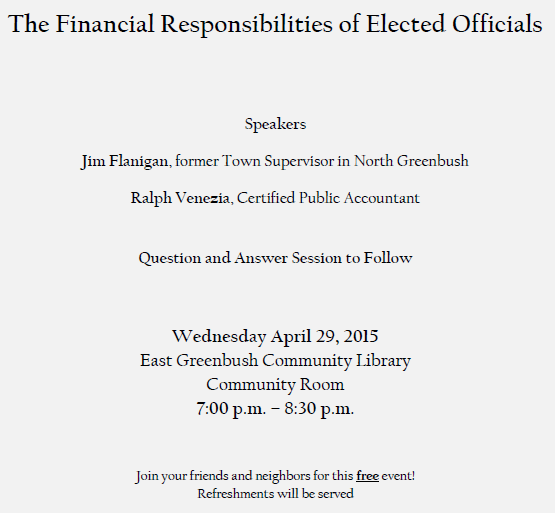 Posted by The East Greenbush Gadfly at 7:54 AM 130 comments:


Not long ago, a member of the Town Board stated in an open meeting that the citizens of East Greenbush were getting too much power.  Look at that statement in the context of the following definition.

The political term, oligarchy, comes to English from the Greek with its meaning intact - a form of government run by a small number of people such as the wealthy ...

An Oligarchy is a form of government controlled by a group, council, or board of directors. Oligarchies typically have no constitution or charter.

Ring any bells?  I heard a lot of talk and comment when the casino initiative was first advanced by the Town Board that the Board was in place and had every right to make the policy which would advance the casino without “checking” with the electorate.  But if you take the time to think about it for a while, and apply the definition to the way government seems to happen around here, I think you’d have to conclude that East Greenbush is run by an oligarchy.  That recent comment by a current Board member about citizens having too much power is the perfect example – attributed to an oligarch. Makes me wonder about the content of Civics classes locally.

But if you throw into consideration the "evolution" of 1 Cooper Ave. and the illegal Plat approval for the Thompson Way development, it's easy to conclude on the Oligarchy argument.  (See the link below for Dwight Jenkins' report on 1 Cooper Ave.)

Some of the same "players" are active in the Plat approval as in 1 Cooper.  Some simple questions:  how does a sewer connection happen during a moratorium on connections?  How many kitchens are in a duplex with four front doors?

Who "owns" East Greenbush......the citizens, or the insiders?

Posted by The East Greenbush Gadfly at 7:55 PM 124 comments: